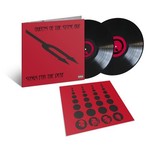 Queens Of The Stone Age
Songs For The Deaf (LP)

On their third album, Songs for the Deaf, Queens of the Stone Age are so concerned with pleasing themselves with what they play that they don't give a damn for the audience. This extends to the production, with the entire album framed as a broadcast from a left-of-the-dial AM radio station, the sonics compressed so every instrument is flattened. It's a joke run wild, punctuated by an ironic mock DJ, and it fits an album where the players run wild. As usual, Josh Homme and Nick Oliveri have brought in a number of guests, including Mark Lanegan on vocals and Dean Ween on guitar, but they've anchored themselves with the drumming of the mighty Dave Grohl, who helps give the band the muscle sorely missing from most guitar rock these days, whether it's indie rock or insipid alt-metal. QOTSA may be a muso band -- a band for musicians and those who have listened to too much music; why else did the greatest drummer and greatest guitarist in '90s alt-rock (Grohl and Ween, respectively) anxiously join this ever-shifting collective? -- but that's the pleasure of the band, and Songs for the Deaf in particular: it's restless and pummeling in its imagination and power.

SIDE A
1. You Think I Ain't Worth A Dollar, But I Feel Like A Millionaire
2. No One Knows
3. First It Giveth
4. Song For The Dead

SIDE D
4. Song For The Deaf
5. Mosquito Song