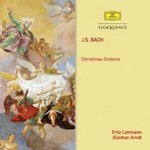 The last recording by a pioneer of the Bach revival on record, newly remastered and issued internationally on CD for the first time. New editorial notes by Bach specialist, Nicholas Anderson, giving context and authoritative detail on the Christmas Oratorio, the career of Fritz Lehmann and this recording project.

At Fritz Lehmann's untimely death on 20 March 1956, during a traditional Good Friday performance of Bach's St. Matthew Passion in Munich, his recording of the Christmas Oratorio was left incomplete. He had recorded the first four cantatas in the first week of August the previous year with many of the same performers who had brought such distinction to his previous recordings for Deutsche Grammophon, including a series of Bach cantatas and Brahms's German Requiem.

No generation has a monopoly on truth and Lehmann's Bach was 'authentic' for the time: a slimmed-down Berlin Philharmonic incorporated modern copies of antique instruments such as the oboe da caccia. They accompanied the finely honed, professionally trained voices of the Berlin Motet Choir which had been founded as recently as 1950 by Gunther Arndt. Deutsche Grammophon's Archiv division quickly made good the incomplete project by assigning Arndt the task of recording the last two cantatas which he did in June and September 1956.

With few rivals in the catalogue, the complete recording was received warmly by the critical press when it was issued later the same year. Particular praise went to Lehmann's outstanding team of soloists: especially the tenor Evangelist of Helmut Krebs who was a distinguished presence in many Bach recordings of the 1950s and 60s. The recording's producer, Dr. Fred Hamel, paid this tribute to Lehmann: 'We are left with his recordings, and even if they […] represent only a fragment of his artistic range, they ensure that his musical qualities will become more widely known. They are the testimonies of a conductor who did not follow prescribed paths but his own law. In accordance with that law, he was simultaneously a dynamic force and an admonitory conscience in German musical life. That is a measure of the gap opened up by his premature death. It will not be easily closed.'

'This is a very successful issue indeed and one that not only communicates the spiritual joy of the Christmas season, but the joy that all felt in taking part in it.' Gramophone, December 1957

'Helmut Krebs is an appealing Evangelist ad Heinz Rehfuss an admirable bass… The chorus and orchestra are excellent, and the late Fritz Lehmann's direction is very satisfying.' Gramophone, December 1967