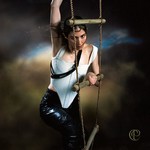 First solo album under her own name from the former Chairlift frontwoman, who has also worked with Beyoncé, Charli XCX, Blood Orange, and Fischerspooner.

"Door," the album's lead single, is "elliptical and strange as Chairlift's most unconventional moments, but shot through with a romantic open-heartedness that's all Polachek." [Pitchfork] The single "Parachute" is "a trembling, operatic ballad in the vein of Björk or Zola Jesus, rendered in the rich electro-organic palette Polachek tends to prefer." [Stereogum].