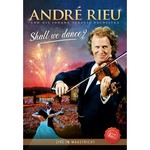 Shall We Dance? The Maastricht Concert 2019
André Rieu

Each year in July André Rieu creates an empire full of joy, dance and romance in his hometwon Maastricht! It is the biggest party of the year and an unforgettable highlight in the lives of 150.000 fans that travelled to the Netherlands in July 2019 from 99 countries to spend an enchanting evening with André Rieu and his Johann Strauss Orchestra.

André Rieu's beloved 2019 hometown concerts were themed as a dedication to the waltz - the dance that helped launch his career more than three decades ago. The hugely popular Maastricht summer concert series are staged in the historic town's atmospheric medieval square.

On "Shall We Dance" the fans are invited to emerge in the romance of the most fantastic waltzes such as The Beautiful Blue Danube, The White Horse Inn, The Czardas Princess, the Sportpalastwalzer, Strauß & Co and - of course - the famous Second Waltz more beautiful than ever seen before with 300 dancers waltzing the night away on the Vrijthof in magnificent ballgowns.

"Shall We Dance" also includes beloved Italian favourites like Volare, Funiculì, funiculà, the majestic Concierto de Aranjuez and Ode to Joy as well as the Platin Tenors moving dedication to Notre Dame de Paris with Au fond du Temple Saint from the opera The Pearl Fishers. Marvel at the glorious voices of international famed sopranos performing the deeply touching On My Own from Les Misérables, Ebben ne andrò lontana from La Wally or Hallelujah by Leonard Cohen. Lose yourself in the romance of The Lonely Shepherd, enjoy the fun of orchestra members competing against each other on their instruments during Circus Renz, join the pianist tap dancing on the piano to Tutti Frutti and Samba into the night with Marina.

This DVD also marks André Rieu's 100th concert on the Vrijthof including a very special and moving award ceremony by the Mayor of Maastricht to the city's most beloved inhabitant, André Rieu.

The Music Of King's