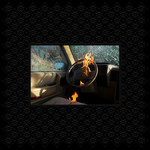 Random Desire started in the aftermath of the last Whigs record, 2017's In Spades, which Pitchfork named one of the best rock records of the year, hailing it as a "heavy, menacing work of indie rock majesty…thrilling and unsettling." Drummer Patrick Keeler was about to take a short sabbatical to record and tour with his other band, The Raconteurs. Dulli's longtime collaborator, bassist John Curley went back to school, and there was the tragic death of the band's guitarist, Dave Rosser.

If many of his grunge-era peers are tapped out or resting beneath, Dulli has proven that creativity can be infinite with a voodoo imagination that tilts towards constant revolution. A gris gris man in the vein of Bob Dylan, Neil Young, Nick Cave, or the dearly departed Purple One, Dulli's never made the same album twice, shapeshifting through funk, soul, hip-hop, jazz, and bloody knuckled rock n' roll without wandering too far from the essence of what defines his sound. But don't expect your older brother's Afghan Whigs. There are serrated guitar attacks, sure, but there are also threnodies built atop sepulchral piano lines, plaintive acoustic hymnals, goth-rock benders, Bedouin caravan raggas, and the occasional hip-hop 808s slap.

Clocking in at a lean 37 minutes, Random Desire is a clinic put on by a veteran master operating at the height of his powers, offering evidence of the hard-fought and weary wisdom learned from setbacks and victories alike. A lucid, confident and self-assured document of the songs of experience, the perils of existence, and the possibilities that offer themselves anew with each breath. Another death and rebirth from an outlaw who has seen it all and somehow lived to tell.