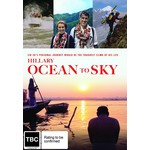 In 1977 Ed and his companions, which included son Peter Hillary, embarked on what would be Ed's last major expedition. The extraordinary journey included tigers, sinking boats and fans queuing for miles to get a glimpse of the great man. The expedition set off shortly after the tragic plane crash where Ed lost his wife and daughter, it was a very personal journey for Ed and Peter. The film sees a side of Sir Ed never seen before, the man behind the myth.

"This recounting of what was endured and achieved is all the richer - and often moving - for being allowed to mature for a few decades." - Stuff.co.nz