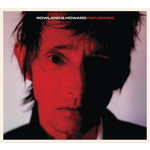 In 2009, not long prior to his untimely death, Rowland S. Howard released his second album, Pop Crimes. The 8 sublime tracks on Pop Crimes reinforce the legacy of the gifted artist, and prove why his records are so treasured amongst music critics and fans alike.

• A re-pressing of the out-of-print record
• Pressed on 180g vinyl at Pallas in Germany, one of the world's premier pressing plants.
• Jonnie Standish of HTRK features on '(I Know) A Girl Called Jonny'
• Features musicians Mick Harvey, JP Shilo, and Brian Hooper.
• Produced by Lindsay Gravina (Jet, The Living End, Magic Dirt