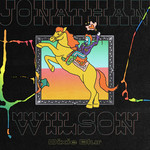 Following the tour, Wilson chose to temporarily leave his Los Angeles-based home and studio and head to Nashville to work with a revered group of musicians and co-producer Pat Sansone of Wilco, to create Dixie Blur, his most personal, accessible and fully realized work to date. The songs harken back to his Southern roots, both musically and personally.

The result is a stunning album filled with warm, thoughtful, melody-rich songs that have an immediate impact upon first hearing it and continues to grow with further listening. Following his past solo efforts Gentle Spirit, Fanfare and Rare Birds, Jonathan Wilson masterfully strikes a balance as he reaches back to the musical foundation of his upbringing while simultaneously moving forward by infusing the music with modern textures and aesthetic soundscapes, thus producing the aptly titled, Dixie Blur.