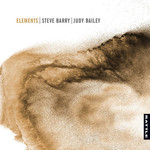 Recorded live in a one-set entirely improvised concert at the Sydney Conservatorium of Music in August 2018, Elements encapsulates the empathetic creative spirit of a longstanding musical partnership between two of Australasia's most fearless and adventurous musicians.

Steve Barry and Judy Bailey gave their first performance of improvisations for two pianos in 2011, following Barry's undergraduate studies with Bailey in the Conservatorium jazz program. Their annual concerts led to the development of a unique improvisational telepathy between the two musicians, not only in terms of the moment-to-moment musical choices they make, but also the broader structural coherence of the musical arcs of each set they perform.

"Judy and I discovered a unique rapport at our first freely improvised duo concert at Sydney's Colbourne Ave in 2011, and Elements is full of the uncanny telepathy that has come to underpin our improvising together. We're both very proud of this album, and hope you enjoy listening to our music as much as we enjoyed making it!" Steve Barry