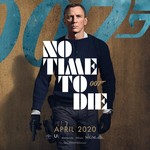 Hans Zimmer's first ever Bond score: the official soundtrack to the latest film in the James Bond saga, No Time To Die (2020).

Joining Zimmer on scoring the soundtrack is Johnny Marr, who is also the featured guitarist on the OST, with additional music by composer and score producer Steve Mazzaro. Both have previously worked with Zimmer.