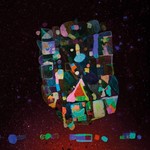 When Little Dragon emerged towards the end of the 2000s, their music - soulful and synthetic - allowed them to forge their own path away from the trends of the time. Now, well over a decade after the early releases, Little Dragon are the trend, with whole scenes springing up in imitation of their sound. On their sixth studio album New Me, Same Us the Swedish four-piece return to prove that there are still few who can do this style of music quite as well as they can.

Ebullient, classy and effortlessly cool, New Me, Same Us contains some of Little Dragon's crispest pop tunes to date. Tracks like Hold On and Are You Feeling Sad? are classic Little Dragon affairs, combining evocative keyboards with snappy funk rhythms to delightful effect. The band also remind us of their range here - Another Lover is the sort of sleek neo soul jam that Thundercat has stamped his name on these past few years; New Fiction falls into one of Tame Impala's dreamy reveries. Throughout all of this Yukimi Nagano remains a charismatic upfront presence - her vocals knitting the whole affair together.

New Me, Same Us is the sound of a band going back to basics to produce some of their most focussed and inarguably best music to date. "This album has been the most collaborative for us yet" they explain, "which might sound weird considering we've been making music together for all these years, but we worked hard at being honest, finding the courage to let go of our egos and be pieces of something bigger."

On their first album in three years, Little Dragon are older and wiser but still doing what they do with style and aplomb - this is New Me, Same Us.
New Me, Same Us was self-produced and recorded in the band's home studio in Gothenburg.