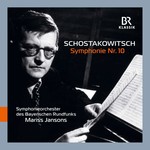 "Janson's Bavaria players are on splendid form, displaying their qualities of character and controlled power combined with precision and unity" MusicWeb

Mariss Jansons considers Dmitri Shostakovich to be one of the most serious and sincere composers ever, and finds the fifteen symphonies in particular to be deeply moving and captivating. He sees their music as bearing shattering testimony to a traumatic era of political darkness, while remaining a timeless expression of existential human feeling and experience. Over a period of seventeen years, Mariss Jansons has recorded all the Shostakovich symphonies, on each occasion together with the orchestra he was artistically associated with at the time. Six of the performances were with the Symphonieorchester des Bayerischen Rundfunks.

In 2006 the cycle was completed in time for the centenary of the composer's birth. The performance of the Thirteenth Symphony was awarded a Grammy in the 'Best Orchestral Performance' category.

"If you want a testimony to what it was we lost when Mariss Jansons died, listen to this disc. In big symphonic works Jansons always had a flair for bringing out both the long singing line and the key details, but this is exceptional…What I'm left with is a sense of wonder, and even a kind of joy at the way both Shostakovich and Jansons are able to express and contain such dark, troubling emotions" Five Stars BBC Music Record of the Month March 2020

"Without matching the savagery of Mravinsky in the Scherzo. Jansons gives a powerful reading where his ability to balance chords and coax impressive execution are brought to the fore. He has the measure of the Shostakovich 10th in every respect but especially in gorgeousness of execution, not that everyone will consider this a prime virtue." Fanfare

"I place this compelling live account of the Tenth from Jansons up there with the finest recordings. Janson's Bavaria players are on splendid form, displaying their qualities of character and controlled power combined with precision and unity. It is hard to fault the effectiveness of the numerous solo sections" MusicWeb