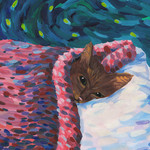 Recorded, produced, mixed and mastered by himself in the bedroom of his new London apartment (some things never change), the 11-song collection is set to prove to the world why Robin Skinner has become not just a cornerstone of the bedroom pop community, but a torchbearer for the next generation of his genre.

By focusing less on the more imperceptible aspects of his productions, Skinner's distilled his energy on Sleepyhead into what really moves fans: the songs themselves, occasionally light-hearted, largely poignant - but always authentically him. The album is awash in ambient indie-rock nuance, creaking acoustic guitars and Skinner's poetic lyricism, all steadied by his tranquil melodies and reassuring timbre.