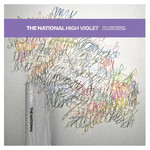 In addition to the 10 original tracks, this triple LP package includes a third LP which includes tracks never before available on vinyl, including 'Wake Up Your Saints', an alternate version of 'Terrible Love', 'Walk Off' and more.

Side B
1. Little Faith
2. Afraid Of Everyone
3. Bloodbuzz Ohio

Side E
1. Terrible Love (Alternate Version)
2. Wake Up Your Saints
3. You Were A Kindness
4. Walk Off