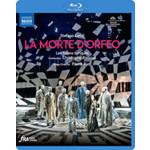 Stefano Landi wrote the operas La morte d'Orfeo (1619) and Il Sant'Alessio (1632), as well as masses, psalms, madrigals and arias. He was maestro di cappella in Padua and Rome, and later a singer in the Sistine Chapel. La morte d'Orfeo is regarded as the first Roman-style secular opera and is considered a milestone in the development of the genre opera as a whole. The substantial ensemble numbers are typical of the Roman opera style, as are the prominent roles for gods, shepherds and magical creatures. Each of the five acts closes with a finale, comprised of choruses alternating with solos, duets or terzets, with the imposing 'Fortunato semideo' as the apotheosis.