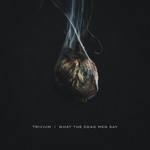 Trivium
What The Dead Men Say

After two decades, eight albums, a Grammy nomination and hundreds of sold out shows, Trivium actualize the all-encompassing ambition they first set in motion back in 1999. On their ninth full-length album, What The Dead Men Say, Trivium ascend to an inimitable nexus of masterful melody, hypnotic hook-craft, tight thrash, black metal scope, and cinematic extremity.

"With the new album, we took what worked on the The Sin And The Sentence and dialed it all up to 11," says bassist Paolo Gregoletto.

Guitarist Corey Beaulieu echoes that sentiment, saying, "We wanted to build on the foundation that we established with the last album. The record has all the elements that are Trivium - along with all of us wanting to keep pushing ourselves creatively. This led to a highly-inspired and fast-paced writing and recording process that really captures the energy of the band."