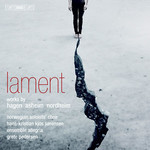 The Norwegian Soloists' Choir and Grete Pedersen have made acclaimed recordings of music spanning a millennium - from chants by Hildegard of Bingen (1098 -1179) to the most recent compositions -and in styles ranging from folk songs to Bach motets and Berio'sCoro.

On their new disc, the focus is on contemporary Norwegian music, with three works which all originate in words and challenge the relation between language and music. For his Lamentfrom 2015, Lars PetterHagenhas chosen to set a short text by E. E. Cummings, written when the poet was 6 years old. The words of the poem are split up and stretched out into pulsating waves of grief, at once mysterious, beautiful and painful. Lamentis scored for choir, percussion and electronics -elements which are in dialogue, yet resigned to remaining at a distance.

Awarded the Nordic Council Music Prize in 2018, Muohta(Snow) consists of 18 sections, each setting a single word in Sámi, the language of the indigenous people in the north of Norway. The words are all related to snow, and composer Nils Henrik Asheimhas found inspiration in how indigenous peoples live with nature, as opposed to seeking to control it. Aurora, finally, is a composition from 1984 by Arne Nordheim, who was for decades the face of Norwegian contemporary music. In Aurora, God's downward gaze on mankind in Psalm 139 is juxtaposed with Dante's gaze upwards, towards God and the heavenly light, in the final verses of the Divine Comedy. The words of the psalm are sung both in Latin and in Hebrew, while Dante's canto is heard in Italian, with Nordheim making full use of the different sounds of the three languages.