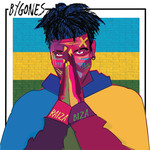 A hypnotic culmination of hundreds of hard drive demos, eclectic musical inspiration and collaboration, enter Bygones - a record striking the balance between the intricacies of electronic production and at times, melodic half-sung poetry, delivered with raw intensity.

Speaking with a sense of urgency in his flowing baritone voice, Biza's work has always carried a socially conscious heart, backed up by honest storytelling and captivating jazz/soul infused production as the aura to his words. His new material follows a new sound arch, and with those changes comes a newly found freedom.

On Bygones, Biza found inspiration in the deeply written metaphors of the Marvin Gaye-era soul and the heart-hitting rhythms of 1970's funk groups like Gapp Band. Binding his grounding in socially conscious thought and observational storytelling, he studies the human condition and the world around us - from his own experience.

Though this time, he admits, the record finds the balance between fun and seriousness. Rather than be ruled by the lyrics, the music plays an emotive part.