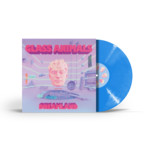 Dreamland finds the British group taking a nostalgic and deeply personal turn. The frontman Dave Bayley revealed that Dreamland "goes through many of the most confusing moments in my life. It's about growing up, from my first memories as a little kid, to now. Quite often those moments are funny, sometimes awkward, sometimes heart-breaking, sometimes it's about love or hate, sexuality. It's about realising it's ok to not have answers and it's ok to not know how you feel about things and that it's ok to be and look vulnerable."

The album was also strongly influenced by drummer Joe Seaward's life-threatening bike accident, which occurred in July 2018. Bayley explained, "The idea for this album came at a time of confusion and uncertainty. My best friend was in the hospital. I didn't know if he'd make it. The future was damn scary and completely unknown. During those weeks in the hospital, it was so difficult to look forwards that I found myself looking backwards. Digging around in my mind, pulling up old memories, finding comfort in them even if they were uncomfortable in themselves."

Thankfully, Seaward did recover, and earlier this year, Glass Animals returned to the road for a short but celebratory run of dates, which were ultimately cut short amid the COVID-19 pandemic.