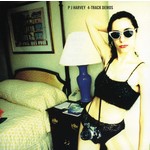 Vinyl reissue of 1993 collection of demos written and recorded at Polly Harvey's home in 1991-1992. It includes eight demos of songs from the album, Rid of Me, released earlier in that year along with six demos of additional songs.

Reissue is faithful to the original package, with vinyl cutting by Jason Mitchell at Loud Mastering.