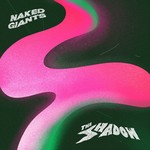 Steadily building up their reputation as a tremendous live act, Naked Giants were named Seattle's best live band by The Seattle Times at the end of 2018 and Rolling Stone named the band one of the 30 Best Artists We Saw during SXSW that year as well. The trio spent most of the past two years pulling double duty as both members of the Car Seat Headrest live band and also supporting each Car Seat Headrest performance with their own set as Naked Giants as well.

'The Shadow' is an energetic and exhilarating musical rollercoaster ride. Within the first ten minutes the band have already careened through a blitz of post-punk riffing, wastoid gang shouting, a singalong anthem-for-the-disaffected and a Talking Heads-ish funk-rock workout with bits of shimmery synth and lo-fi slide guitar riffing thrown in for good measure.