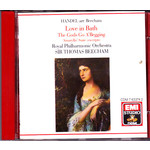 Love in Bath is an orchestral suite, with one vocal number, arranged in 1945 from the music of George Frideric Handel by the conductor Sir Thomas Beecham for a projected ballet entitled The Great Elopement. It was the last of six suites of Handel's music arranged by Beecham from 1924 onwards.

It was first heard in a broadcast by the American Broadcasting Symphony Orchestra, conducted by Beecham, on 7 April 1945. The first concert performance followed five days later, by the Rochester Philharmonic under Beecham. He continued to include movements from the work in his programmes for the rest of his life, and it featured in his final concert, in May 1960, less than a year before he died.