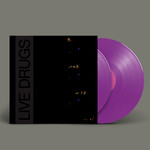 The War On Drugs are back with Live Drugs, their first new album since 2017's GRAMMY-winning A Deeper Understanding.

Live Drugs is sequenced to reflect how a typical 70-minute show would flow. It thrives on live set staples immortalized on record for the first time and illustrates how years of live performance nurtures an evolution of the songs. This includes "Buenos Aires Beach" from the band's 2008 full-length debut, Wagonwheel Blues, and a cover of Warren Zevon's "Accidentally like a Martyr." An early live version of A Deeper Understanding's "Strangest Thing" feels joyfully loose; Granduciel fell in love with this version while going through the recordings with mental notes of memorable shows. On the last five minutes of the live favorite, "Under the Pressure," a crowd of 20,000 people are heard singing along to the extended guitar melody. Or take "Eyes to the Wind," the version heard here has grown wholly independent of the version found on Lost in the Dream.