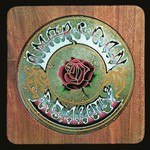 The crown jewel of the Dead's studio output!

The album's original 10 tracks include many of the Dead's best-known, most-loved, and most popular songs both on record and in concert for the next 25 years. An album that includes Box Of Rain, Friend Of The Devil, Sugar Magnolia, Candyman, Ripple, Brokedown Palace, Attics Of My Life,and Truckin' looks more like a greatest-hits compilation than a second album of 1970, and yet American Beauty demonstrates a band unable to slow down in terms of the quality of its writing, recording, and performing.