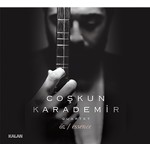 With his traditional music works Coskun Karademir is very well known in Turkey as a musical director, producer and bağlama master for many years. When his group The Secret Ensemble, which included renowned Iranian vocalist Mahsa Vahdat, released its first album Kuşların Çağrısı (The Call of Birds), he emerged onto the world stage to great public interest.

Then he worked on a duet album Endless Path with Mahsa Vahdat, produced by Erik Hillestad and released to the world music market under the KKV label, was acclaimed by the press and musical authorities as a "masterpiece of mystical music".

And both albums receipt with excitement by the international music authorities and selected as "Top of the World Album".

In his latest album Essence- Öz, Coşkun Karademir returns back to the innovative fusion style he created with eastern and western instruments in The Secret Ensemble, this time with a quartet. Coskun Karademir Quartet, he brings very selective music masters once again. Other than his mastership with bağlama and kopuz instruments he uses duduk, cello and percussion to create the sound in this mind.

In "Yayla-Mountain Meadow" you can hear the dialogue of the nature of an Anatolian Meadow, as well as the growing sounds of the flowers in "Cicekler- Flowers". You can go to the era of King Alfonso X with his composition for Virgin Mary "El Sabio" in Cantiga forms. "Ruzgar- Wind" makes you feel the Bosphorus Breeze on your face then you can find yourself at an Iranian historical city with "Abyaneh". Quartet remembers exceptional Sah Hatayi to show respect the artists Alevi ancestors. Devirdaim takes you a trip to show you soul's travel beyond time and places to be a good person with the guidance of Iranian singer Sepideh Raissadat's fantastic voice.

All of these, so called different pieces are melted and transformed into a new understanding with the experience of visionary musicians who aims to bring East and West together in "Essence- Oz" Album with a strong narrative. Karademir's own compositions, Levent Gunes's compositions and arrangements and Anatolian and Western Mystic pieces are the mainly used as essence of the album.

After his experiences in his previous works Karademir tells us how music merges and effects the people, history and basically essence of the of the humanity. Timeless, ageless, borderless, without the separation of religion and language, there is only feelings and music master's the narrative in "Essence- Oz" album.