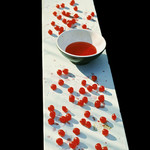 Originally released in April 1970, one month before The Beatles' swansong 'Let It Be', McCartney saw Paul getting back to basics. Writing every song and playing every instrument (with backing vocals from Linda McCartney), the eponymous album represented a creative rebirth, bursting with new ideas, experiments, playfulness and freedom. Sonically, McCartney's bare-bones home recording aesthetic imbued the album with an authentic lo-fi spirit, a much sought after sound that continues to retain a contemporary edge 50 years on. In contrast to the professional difficulties that came with the demise of the world's most iconic band.

Side one:
The Lovely Linda
That Would Be Something
Valentine Day
Every Night
Hot as Sun/Glasses
Junk
Man We Was Lonely