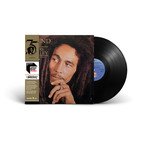 The classic Marley album, the one that any fair-weather reggae fan owns, Legend contains 14 of his greatest songs, running the gamut from "I Shot the Sheriff" to the meditative "Redemption Song" and the irrepressible "Three Little Birds."

Some may argue that the compilation shortchanges his groundbreaking early ska work or his status as a political commentator, but this isn't meant to be definitive, it's meant to be an introduction, sampling the very best of his work. And it does that remarkably well, offering all of his genre-defying greats and an illustration of his excellence, warmth, and humanity. In a way, it is perfect since it gives a doubter or casual fan anything they could want.

Let's face it, the beauty and simplicity of Marley's music was as important as his message, and that's captured particularly well here.
5 / 5 All Music Guide