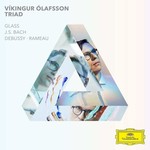 With three albums on Deutsche Grammophon so far Ólafsson is known as one of the most exciting pianists of today and widely acknowledged for his "individuality of spirit and intelligence of execution" (Limelight Magazine). His albums from 2017, 2018 and 2020 comprise a broad scope of repertoire including Philip Glass, J. S. Bach, Claude Debussy and Jean Philippe Rameau.

"Ólafsson's interpretations inhabit a unique, distinct and extraordinary world all their own...[he] possesses that rare gift of illuminating a familiar work in unexpected ways, revealing hidden depths and drawing out its best qualities...In Glass's music, each repetition is enriched by subtle changes in colour, voice-leading and articulation, as if Ólafsson were continually refreshing the page on his musical server." Gramophone Magazine Editor's Choice, April 2017 (on the Glass)

"Ólafsson's touch is malleable: suggestive in the Debussy pieces and bracingly gritty for Rameau. The centrepiece of the collection is his own transcription of an interlude from Rameau's final opera, Les Boréades, which comes over as a meditation." (on the Debussy/Rameau)

"I expected this to be good; but just how good it was was still a surprise…Ólafsson creates a ravishing musical sequence. Every track has its own allure, and many reflect a virtuosity which is never flaunted; he treats the preludes and fugues as though they had been conceived as tone-poems or études" BBC Music Five Stars (on the Bach)