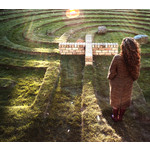 Brave Caitlin Smith's Imaginary Band
You Have Reached Your Destination

Granted Creative NZ funding in 2007, recorded at Roundhead Studios in 2009… Caitlin Smith's album has finally reached its destination - you! Specifically, your ears, your fingertips and (for those who can access it) your eyes.

Staying true to her vision for the album took considerable determination and effort. Smith's dream, informed by legal-blindness since birth, is to encourage 'deep listening'. Aligned with a spirit of transparency, solo acoustic recordings of the songs will be available on Bandcamp.

Smith's footsteps are heard between each track allowing all 75 minutes to be experienced as one continuous/seamless work. The listener is invited into their own 'inner pilgrimage' as liner notes further explain.

This release is all about timing… divine timing. When the first Lockdown due to COVID-19 postponed a nationwide tour one week before it was due to begin, the CD wasn't ready. When the second lockdown was announced the night before the official launch party at Anthology Lounge for Creative Jazz Club (CJC), the CD wasn't ready. Now, it is ready.

It simultaneously represents many communities that Smith belongs to and intersects with, as well as being an immensely personal 'initiation'. Representing: Blind Pride, having and holding an artefact, the recovery movement, art as opposed to entertainment, the poetry/spoken word communities, getting real about mental health issues, teaching voice and songwriting, independence and peer support with songwriters internationally.