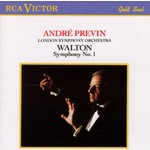 "André Previn's Walton First Symphony remains the performance by which all others must be measured. Dating from the mid-1960s, at the start of Previn's highly successful tenure at the LSO, this recording impresses with the urgency and hair-trigger precision displayed by both conductor and orchestra. Has the first movement ever had more tension, the scherzo more malice, or the slow movement more bluesy melancholy? I doubt it. Even the finale works beautifully, its coda bringing the work to a satisfying culmination that never sounds too facile. Vaughan Williams' The Wasps Overture makes an excellent encore, just as magnificently played, and the sonics, outstanding for their day, still sound pretty wonderful. This disc, a true classic, never should be out of print, and thanks to Arkivmusic's on-demand release program, it won't be." 10/10 ClassicsToday