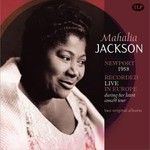 General critical consensus holds Mahalia Jackson as the greatest gospel singer ever to live; a major crossover success whose popularity extended across racial divides, she was gospel's first superstar, and even decades after her death remains, for many listeners, a defining symbol of the music's transcendent power. With her singularly expressive contralto, Jackson continues to inspire the generations of vocalists who follow in her wake; among the first spiritual performers to introduce elements of blues into her music, she infused gospel with a sensuality and freedom it had never before experienced, and her artistry rewrote the rules forever. Born in one of the poorest sections of New Orleans on October 26, 1911, Jackson made her debut in the children's choir of the Plymouth Rock Baptist Church at the age of four, and within a few years was a prominent member of the Mt. Moriah Baptist's junior choir. Raised next door to a sanctified church, she was heavily influenced by their brand of gospel, with its reliance on drums and percussion over piano; another major inspiration was the blues of Bessie Smith and Ma Rainey.
All Music Guide.