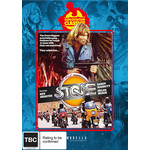 Sandy Harbutts seminal bikie movie, Stone, packed out drive-ins around the country in the early 1970s with its potent mix of sex, drugs, rocknroll and unbridled horsepower and in the process helped kickstart the Ozploitation explosion. Ken Shorter (Sunday Too Far Away) is Stone, an undercover cop who infiltrates an outlaw motorcycle gang to investigate a series of grisly killings. He is thrown into the world of the Gravediggers alienated Nam Vets who live in a fortress by the sea and have their own law, their own satanic religion, their own bevy of bikie chicks (including Rebecca Gilling, Return To Eden, in her film debut) and a nasty habit of getting into violent and bloody gang battles.

" Sandy Harbutt is the film's creator and its soul and has become a central icon in the film's legacy as it continues to touch its primary target audience - motorcycle lovers and fellow travellers, who reject mainstream society, who do not salute authority. " - Urban Cinefile Critics (Urban Cinefile)