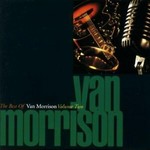 Originally reluctant to have a 'greatest hits' compilation in the market, the popularity of The Best of Van Morrison was such that Van himself curated the second collection of his career.

Focusing mainly on his work from 1984-1991, the songs featured on this release weren't hits in the traditional sense, but do highlight a productive period that was perhaps a little underappreciated due the dominance of his 1970s recordings.