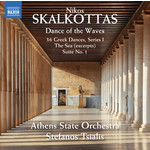 Nikos Skalkottas was the foremost Greek composer of the 20th century, and his 36 Greek Dances is undoubtedly the most popular work of Greek art music today and a monument to the nation's rich cultural heritage. The Sea describes the experiences of a trawler on waters both calm and stormy, while the Suite No. 1 is a cornerstone of Skalkottas' symphonic output that balances the worlds of atonality and neoclassicism. The piece was amongst manuscripts Skalkottas left behind in Berlin in 1933, and he later reconstructed it from memory. The first volume in this series from the Athens State Orchestra (8.574154) was considered 'a revelation' by ClassicsToday.com.