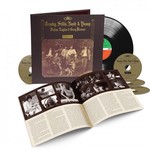 Presented in a 12 x 12 hardcover book, the collection comes illustrated with rarely seen photos from the era and annotated by writer/filmmaker Cameron Crowe, whose revealing liner notes recount the making of the album through stories told by the people who were there, including David Crosby, Stephen Stills, Graham Nash, and Neil Young.