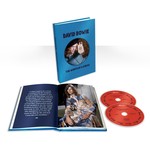 David Bowie
The Width Of A Circle (CD / Book)

The 2020 re-release of The Man Who Sold The World restored the album's intended title Metrobolist, while featuring a new mix by original producer Tony Visconti. Taking its name from the album's opening track, which was named after a painting by Bowie's friend George Underwood, the new two-CD set The Width Of A Circle acts as a complementary piece to that album.

This set includes non-album singles, a BBC In Concert session, music for a TV play and further Visconti remixes wrapping up Bowie's recordings from 1970 and revealing the first sonic steps toward Hunky Dory.

The Width of a Circle contains 2 CDs plus a 48-page booklet housed in a hardback book style package.