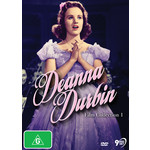 From the late 1930s to the mid-1940s, Deanna Durbin was one of the most popular singing stars in the world. Her Hollywood musicals were a hit with the critics and the public alike and she was adored by countless millions of fans. The world reeled when, in 1948, Deanna suddenly announced that she was to retire from film-making at the age of just 27 and her name has since passed into Hollywood legend.
Blessed with the voice of an angel, Deanna Durbin is now best remembered for her superb performances as a singer, but she was also an exceptionally gifted actress and comedienne.
The nine films included in this collection capture Deanna at the height of her career, singing many of her best-loved songs and leaving us with performances to cherish.