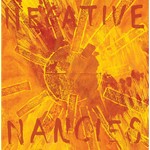 Negative Nancies exist in their own universe. The songs evolve organically through rehearsal room experimentation. Amid the art-punk chaos an irrepressible undercurrent of pop melodicism and moments of eerie psychedelic calm shine through the Casio+guitar+drums+vocals noise.

Negative Nancies don't play by anyone's rules. Songs unfold in unusual ways. Sombre glory, impish mischief. Wired anxiety, manic glee. It makes sense until it doesn't. And vice versa. It's not so much Dada as Dunedina - filtering observations about everyday human behaviour and existential absurdity through an organic wild-yeast approach to song creation and performance. They don't want to be banned; they just want to play in a band.

The recording brings out all the band's rickety fizzing danger and punk energy. HEATWAVE sounds like it was recorded in a concrete basement with mains leads running through puddles of water, everything crackling with arcing live electricity and a sense of danger.

Negative Nancies are an intergenerational amalgam of musical explorers. Mackay and Smith have emerged from the subterranean shadows of Dunedin's experimental music scene - their Richard Maybe's Passion for Nature duo performing at Audio Foundation's Lines of Flight, and Nowhere! experimental music festivals - while Elborado was a member of eighties and nineties underground Flying Nun Records bands including The Terminals, Scorched Earth Policy, and The Shallows.