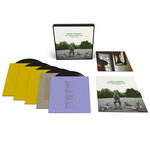 In celebration of the 50th Anniversary, George Harrison's, All Things Must Pass, is being celebrated with a suite of new releases highlighted by a stunning new mix of the classic album by Grammy Award-winning mixer/engineer Paul Hicks, overseen by executive producer Dhani Harrison. The 5LP (180g) Deluxe Edition contains an all-new remix by Paul Hicks. Spread across 5 LPs, the first 3 LPs feature the main album followed by 2 LPs containing 17 tracks of demo recordings, session outtakes and studio jams. Includes 8-page insert with photos and notes from Dhani Harrison and Paul Hicks on remixing the album.