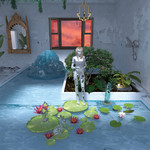 Lala Lala
I Want The Door To Open (LP)

Coming off of 2018's acclaimed The Lamb, an introspective indie rock album recorded live with a three-piece band, Lily West knew she was ready to make something sonically bigger and thematically more outward-looking than anything she'd done before; a record that would be less a straightforward documentation of her own personal struggles and more like a poem or a puzzle box, with sonic and lyrical clues that would allow the listener to, as the title says, open the door to the greater meaning of those struggles.

The result is I Want The Door To Open, a bold exploration of persona and presence from an artist questioning how to be herself fully in a world where the self is in constant negotiation. From the moment West declares "I want to look right into the camera" over a cascade of dreamy vocal loops on opening track "Lava," I Want The Door To Open distinguishes itself from anything she's done before in scope and intensity. The ultra-magnified iteration of Lala Lala is fully encapsulated in the monumental "DIVER." Inspired by a character from a Jennifer Egan novel, it's a pop song of Kate Bush-esque proportions replete with layered synths and booming, wide open drumming contributed by fellow Chicago musician Nnamdi Ogbonnaya, and West pushing her vocals to the ragged edge.

West co-produced I Want The Door To Open with Yoni Wolf of Why? and reached out to various music friends to help her achieve a galactic level of atmospherics that would've been impossible on her own. In addition to Ogbonnaya, I Want The Door To Open features contributions from poet Kara Jackson, OHMME, Adam Schatz of Landlady, Sen Morimoto, Christian Lee Hutson, and Kaina Castillo. Former tour mate Ben Gibbard can be heard on the gentle "Plates," a song about accepting the past regardless of whatever negative feelings accompany those memories; a necessary act for unlocking the door to the present moment West is actively seeking on the record.