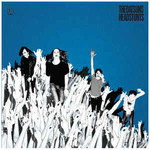 The Datsuns are thrilled to finally release Headstunts, their fourth album, on vinyl - a conspicuous gap in their fans' record collections.

Self-produced and recorded in Gothenburg, Sweden in 2008, Headstunts is The Datsuns delivering a high energy mix of cutting rock 'n' roll anthems and power charged riffs.

"Headstunts (an anagram for The Datsuns) was almost like making our first record again, with new influences and abilities. With a brand new member (Ben Cole) on drums, we were able to feed off each other in different ways, and also revive some old ideas that did not click before. Taking those ideas, and then flipping them around, just like you do with an anagram. So I suppose there is some kind of very clumsy poetry there."

The Datsuns - one of the first international success stories to come out of the New Zealand music scene in the early 21st century are loved by dedicated fans around the globe, and are currently adding the final touches to their long awaited seventh album.