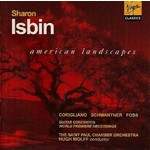 On this recording, made during 1993 and 1994, Ms. Isbin takes on three unique American guitar concertos that she herself commissioned to expand the guitar concerto repertoire. With "Troubadours", a series of variations for guitar and orchestra composed by John Corigliano, Ms. Isbin explores the music of medieval troubadours from a uniquely 20th century perspective.

Schwantner: From Afar....A Fantasy For Guitar And Orchestra