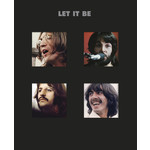 Contents:
CD1 - New stereo mix (by Giles Martin) of the original album
CD 2 - Get Back - Apple Sessions: Various alternate takes
CD 3: Get Back: Rehearsals and Apple Jams
CD 4: Get Back LP: 1969 Glyn Johns Mix
CD 5: Let It Be EP: Two Glyn Johns Mixes from 1970 and new mixes of the single versions of Let It Be and Don't Let Me Down
Blu-ray: Dolby Atmos Mix, 5.1 mix, hi-res stereo version of new mix