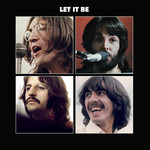 The Beatles
Let It Be (50th Anniversary Reissue LP)