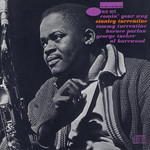 Stanley Turrentine is at his blues-drenched best on Comin' Your Way. This session from 1961 features the magnificent rhythm section of Horace Parlan on piano, George Trucker on bass and Al Harewood on drums, better known as the Horace Parlan Trio. Also featured is Tommy Turrentine (Stanley's brother) on trumpet, who contributed the tune "Thomasville" on this set, showing his strong Fats Navarro influence. This quintet was at the peak of their collective power at this time, with this same group also making the classic Blue Note Horace Parlan records, Speakin' My Piece and On the Spur of the Moment. Comin' Your Way completes this magical hard-bop trilogy!

The Blue Note Tone Poet Series was born out of Blue Note President Don Was' admiration for the exceptional audiophile Blue Note LP reissues presented by Music Matters. Was brought Joe Harley (from Music Matters), a.k.a. the "Tone Poet," on board to curate and supervise a series of reissues from the Blue Note family of labels.

Extreme attention to detail has been paid to getting these right in every conceivable way, from the jacket graphics and printing quality to superior LP mastering (direct from the master tapes) by Kevin Gray to superb 180 gm audiophile LP pressings by Record Technology Inc. Every aspect of these Blue Note/Tone Poet releases is done to the highest possible standard. It means that you will never find a superior version. This is IT.

B1: Thomasville
B2: Someone To Watch Over Me
B3: Stolen Sweets