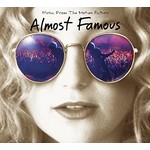 Celebrating 20 years of the Academy Award winning film by Cameron Crowe, the Grammy winning Almost Famous soundtrack is reissued as a deluxe 2CD with 35 songs from the film including Stillwater, Led Zeppelin, Fleetwood Mac, and many more.