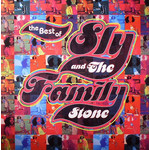 Sly & The Family Stone
The Best Of (Coloured Vinyl LP)

Along with James Brown and Parliament-Funkadelic, Sly & the Family Stone virtually invented 1970's funk. Their fusion of R&B rhythms, infectious melodies, and psychedelia created a new pop/soul/rock hybrid. The impact of Sly's music has proven widespread and long-lasting. For instance, Motown producer Norman Whitfield patterned the label's forays into harder- driving, socially relevant material (such as The Temptations' "Runaway Child" and "Ball of Confusion") based on their sound.

The pioneering Stone had a major influence in the 1980's on artists such as Prince and Rick James. Legions of artists from the 1990's forward - including Public Enemy, Fatboy Slim, Arrested Devellopment, Beck and many others - mined Stone's back catalog for samples.

For those not familiar with Sly this 2LP set is a great introduction and an invitation to dig deeper into Sly & The Family Stone's catalogue. This 20 track compilation covers all the hits & fan favourites from the 1968-1974 period.

The Best Of Sly and The Family Stone is now available as a limited edition of 2000 numbered copies on transparent pink vinyl.