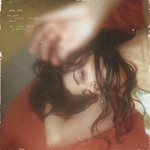 One hand on the steering wheel the other sewing a garden is the name of the second album by Canadian songwriter Alexandra Levy, publicly known by the moniker Ada Lea. On one hand it's a collection of walking-paced, cathartic pop/folk songs, on the other it's a book of heart-twisting, rear-view stories of city life.

Ada Lea has followed up the creative, indie-rock songcraft of her debut what we say in private with surprising arrangements and new perspectives. The album is set in Montreal and each song exists as a dot on a personal history map of the city where Levy grew up.

Many of the songs on one hand came together with a blend of studio tracks and elements from the pre-recorded demos. The resulting sounds range from classic, soft-rock beauty to intimate finger-picked folk passages and night-drive art-pop. And the textures are frequently surprising due to the collage of lo-fi and hi-fi sounds that tastefully decorate the album without ever clouding the heart-center of the song. In their subtle, sonic variety, all of the album's songs flow together with ease into one big, romantic dream for Levy's silken vocals to float above.