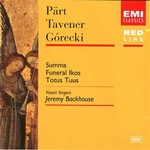 Summa was initially written in 1977 as a choral work (a setting of the Credo), then later scored by Pärt for instruments.

The Lamb, one of Tavener's most frequently performed choral works, is a setting of the familiar poem from William Blake's Songs of Innocence.

The Beatitudes for mixed choir or soloists and organ, composed in 1990 and revised in 1991, is one of the first works in which the composer uses the English language.

The Funeral Ikos (or 'Funeral litany') dates from 1981 and is a radiant setting of words from the Greek funeral sentences for the burial of priests. Its extreme stylistic simplicity allows the listener to immerse himself in the beauty of the text.

Litany for flute choir was written in 1981. Alan Ridout studied at the Royal College of Music under Gordon Jacob and Herbert Howells

Two Hymns to the Mother of God (1985) was written in memory of the composer's mother.

Sieben Magnificat-Antiphonen or Seven Magnificat-Antiphons for mixed choir a cappella were composed in 1988. As the title indicates, these are seven antiphons sung in the Roman Catholic liturgy during Evening Prayer on the seven days leading up to Christmas Eve (from 17 to 23 December)

The 'Collegium regale' setting of the Magnificat and Nunc Dimittis (1986) combines Eastern and Western elements. Stephen Cleobury and the Choir of King's College, Cambridge commissioned the work. With the Dean's encouragement, Tavener interpolated the refrain 'Greater in honour than the cherubim' from the Orthodox Matins version of the Magnificat, thus adding richness to the Anglican rite.