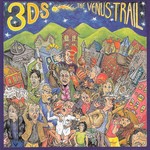 Flying Nun Records and The 3Ds are pleased to announce the 2021 vinyl reissue of The Venus Trail, due out October 22nd. This vinyl reissue has been remastered by long-time friend and engineer Tex Houston, taken from the original tape masters held at the Alexander Turnbull Library.

Originally released in 1993, and recorded in a disused Masonic Lodge in Dunedin, The 3Ds' second full-length album, The Venus Trail, has all the insanity, silliness, and in-your-face guitar blasts from the band's earlier releases.

The album's swarm of gruesome guitar tunes makes it an immediate attention grabber, and the songs are well balanced by rock solid lead vocals that pull the wayward free-for-all toward some semblance of melodic order.

Hailed by critics and fans in the group's home country of New Zealand as the best rockin' thing since plugged in guitars, The Venus Trail packs an even deeper punch and fits the band's off-center aesthetic to a T.